Remy van den Berg is from The Netherlands but has called Bolivia home for the past 9 years and has been guiding for the past 5 years. His passions are being outdoors, rafting, climbing, biking, and spending time with his wife and two sons. He speaks Dutch, English, and Spanish fluently.

Remy says about visiting Bolivia: “For me Bolivia is the best and most stunning country in the world. It would be an amazing pleasure to take you on our adventures through this wonderland!!! Hidden Inca cities, Andean mountains, Amazon Rainforests and much more. Hope to see you soon!!!” 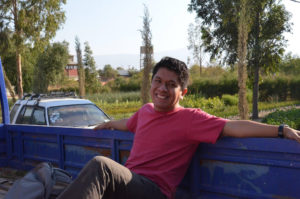 Born and raised in Cochabamba, Ariel is one of these cultivated and energetic Bolivians who loves his job when it comes to showing off the beauties of his homeland to foreigners.

Since he loves to travel, meet new people and get to know other cultures, since he was a kid he knew he wanted to work in the tourism industry. But he wasn’t specifically looking forward to being a Guide. It was while studying a degree in Tourism that he had his first encounter with this job, when he got an offer from the college director to be the guide for a small group of travelers.

Ariel loved it so much that he decided to become an Official Guide and he’s been doing it for 8 years now with no intention of changing. “Every day, every traveler is different and that’s what makes this work so special”, he says.
During the journeys with travelers he often likes to teach them to dance to Bolivian music!During his free time, Ariel likes to practice sports. He plays soccer and swims, and he also loves extreme sports.

Alex Brandino
Was born in Italy in 1982 where he remained until 2005 when he decided to make a change in his life. Passionate about travel he decides to leave for Australia where he stays for 2 years, followed by New Zealand, Canada and Switzerland countries that have affected him so much that he stays there for several years, having the opportunity to discover many of their secrets and immerse himself in the depths of everyday life to feel (almost) like a local, but always with the awareness of being a guest and respect the country that was his home at that time. In 2012 he makes a trip as a backpackers around South America and once in Bolivia he falls in love with this country rich in nature and an incredible culture. Alex now lives in Cochabamba and has decided to turn his passion for travel into his job.

“I’ve been lucky enough to be able to travel and now I’d like to show others the things I’ve seen and learned, from the point of view of a stranger who discovers new things every day”.

He loves to get to know new people and cultures, walking through the streets of Cochabamba in search of one of the new things to discover and immortalize with his camera, hiking, mountain biking and spending time with friends. Alejandro Herbas was born in France and he is half-French and half Bolivian. After travelling in many countries around Europe, Asia and America, he decided to stay in Bolivia to know his roots and his culture. His house in Cochabamba receives a lot of travellers from around the world and he shares his knowledge about Bolivia. Now, he is studying tourism in Cochabamba and he speaks Spanish, French and English. He loves to speak about history, culture, languages and travelling because he studied first Latin American languages and culture in France! During his free time, he teach French and Spanish for Bolivian people and for strangers, he is a musician and he plays in many bands, he likes to organize artistic events in Cochabamba.